Röda Lacket is a finely ground loose snus, with a dark tobacco character and notes of leather and dried fruit. The snus is easily formed into a portion that fits perfectly under the lip. 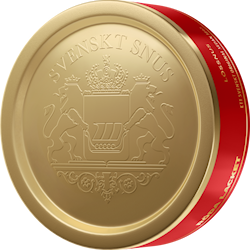 A SWEDISH ORIGINAL SINCE 1897

Röda Lacket has experienced many changes over the years. In 2006, we boosted the flavors and the can was given a new design. However, it’s still the same snus that is easily formed in to a portion with a rich tobacco taste. Röda Lacket has been a bearer of Swedish snus tradition for more than 100 years.

It all began in Norrköping, Sweden

The story of Röda Lacket began in Sweden, way back in the 1700s with Petter Swartz. He grew up in Bergslagen, but later moved to Norrköping where he opened his own snus factory in 1753. At the height of production, the family’s tobacco crops covered an area of more than 50 soccer fields around Norrköping. They also made a name for themselves by not selling snus in the standard paper cones of the time, but in their beautifully designed metal boxes.

One of our oldest snus brands

The Swartz brothers built up their business on seven different recipes. The company, and its snus recipes, continued for six generations. Röda Lacket became the strongest brand and was registered in 1897. When the Swedish government monopolized the tobacco industry in 1915, all manufacturing was to be centralized but because of Röda Lacket’s market size, the closure of the Norrköping factory was postponed for several years. The monopoly was lifted in the 1960s, but Röda Lacket lives on. Today, we only manufacture Röda Lacket in its original loose snus form.