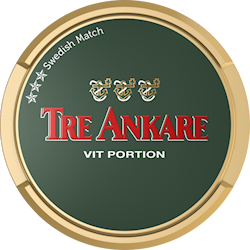 LAID THE FOUNDATION FOR CONTEMPORARY SNUS

Before Tre Ankare, all snus was loose snus – and you had to form it yourself. Forming your own loose snus with your hands is an art but, for the uninitiated, it looks like a messy procedure.

So, in 1973, the product developers at Swedish Match created a snus flavored with whiskey, which came in portion pouches and didn’t look much different to teabags. These small snus pouches were then packed into a small plastic bag. The product failed and the brand was withdrawn from the market. However, although the plastic bags were a debacle, studies showed that many people had enjoyed this new way of using snus. So we continued to develop the idea, and finally had a breakthrough in 1977. Our breakthrough was Tre Ankare – the first portion snus on the market, and the foundation for all portion snus that we manufacture today.

Nowadays, Tre Ankare is only available in White Portion but the flavor is similar to the first original pouch. A powerful snus, with a strong tobacco character and a touch of smokiness.